I was fourteen or fifteen when I first read Julia Alvarez’s How Tia Lola Came To Visit Stay. Though I didn’t have the words to explain it to myself even then, I was left feeling vaguely uneasy and offended by her portrayal of the titular character. Rereading it almost fifteen years later, I find I feel the same way. Here’s why. 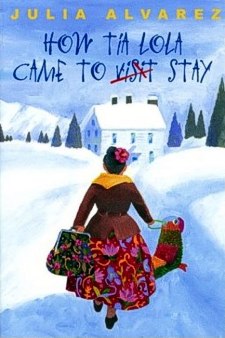 Following his parent’s divorce, Miguel has just moved from New York City to Vermont with his mother and his sister Juanita when his mother announces that her aunt, Lola, is coming for a visit from the Dominican Republic, where both Miguel’s parents are from.

Tia Lola is a Mary Poppins-like character who teaches the kids to get along and make friends in their new Vermont town by using a Latina charm so disappointingly stereotypical that she brings over a piñata in her suitcase and makes huevos rancheros for the town grump, both of which are Mexican and not common in the Dominican Republic. (This is especially disappointing because Julia Alvarez has Dominican ancestry and should probably know better than to conflate all Latin American traditions and gastronomy.)

She arrives at the airport in a “colorful summer dress”. In the middle of a Vermont winter. Because she’s all island-y, you see, and island-y people don’t know about winter coats.

Where Mary Poppins is “practically perfect in every way” Tia Lola is silly enough to rush to window to see if cats and dogs really are pouring down from the sky when Miguel says something to that effect, reinforcing the stereotype that someone who doesn’t speak English well or is confused by certain idioms, must be ignorant. 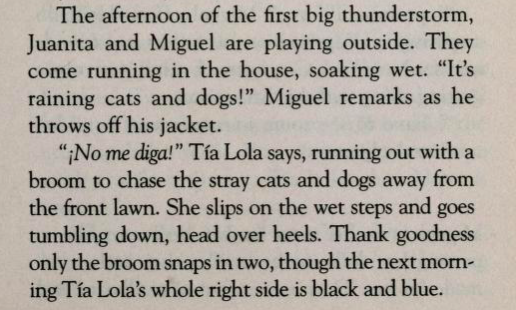 After months of living in the U.S. and avoiding learning English, Tia Lola decides that she will stay and consents to have the children teach her the language:

Learning English seems to involve repeating phrases and words, parrot-like, without regard for what they actually mean, as if the island-y Tia Lola cannot comprehend that each word has a specific meaning.

But then, that fits with the characterization of Tia Lola, who at times seems more childlike than Miguel or Juanita– she wanders away immediately upon arriving in New York for her first visit to the city, and paints their rented house a bright purple without consulting Miguel’s mother or the house’s owner. You know, like any regular adult would do.

(Also–there are no volcanoes in the Dominican Republic. Small detail, but an easily-Googled one and yet another one in the long list of things people get unnecessarily and pointlessly wrong. And if this wasn’t a mistake but a conscious decision meant to exoticize the island, well, then that’s problematic as well.)

View all posts by lydiasanandres