I’m so excited to announce that A Summer for Scandal, the first book in my Arroyo Blanco Series, has been re-released! 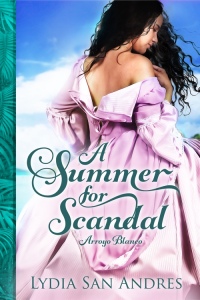 When Emilia Cruz agreed to accompany her sister to a boating party, she had no idea that the darling of the literary world would be in assistance—or that he would take such pleasure in disparaging the deliciously sinful serial she writes under a pseudonym. No one save her sister knows she’s the author and to be found out would mean certain scandal.

Stuck on his long-awaited second book, Ruben Torres has begun to edit in secret a gossip paper whose literary reviews are as cruel as they are clever. The more he writes about the mysterious author of a popular serial, the more papers he sells…and the more he is determined to find out her identity before anyone else can.

In addition to the gorgeous new cover that will be in line with the upcoming books in the series, A Summer for Scandal now has an epilogue and some expanded scenes (some with a little extra steam!). I’ve also taken the opportunity to fix a few mistakes that slipped into the first version.

If you’ve already purchased it, you can update the file via the retailer you bought it from. (If for some reason you’re unable to update, contact me via the contact form on this site and I’ll email you a copy in the format of your choice, plus my deepest apologies!)

If you haven’t, well, what are you waiting for? You can find A Summer for Scandal at the following retailers:

As the first book in the series, A Summer for Scandal will remain at a discounted price of US$ 1.99.

Add it on Goodreads here and check out the Pinterest board I created for it:

If you’re interested in more stories set in Arroyo Blanco, you might enjoy A Season for Wishes, a Christmas novella set in the town.

And if you’re curious about the woman who tries to convince Ruben she’s Miss del Valle, she has a novella of her own! The Infamous Miss Rodriguez is the first in a series that takes place in Ciudad Real.

And so does Miss Dominguez’s Christmas Kiss, a free short story!

As for the next book in the Arroyo Blanco series, A Time for Desire is the story of Roberto Sandoval and Rosa Castillo, one of the suffragettes who appears in A Summer for Scandal. It features government corruption, tons more suffragettes, and a bearded hero (if you follow me on Twitter, you know those are my favorite kind of heroes!). It will be available sometime in late 2017.

Whew! I think that’s all for now! As always, I love to hear from you, so leave me a comment or find me on Twitter!